Setting of the Story

The city of Patara in the country of Lycia

Patara (Lycian: Pttara), later renamed Arsinoe (Greek: Ἀρσινόη), was a flourishing maritime and commercial city on the south-west coast of Lycia on the Mediterranean coast of Turkey near the modern small town of Gelemiş, in Antalya Province.  (From Wikipedia, the free encyclopedia) 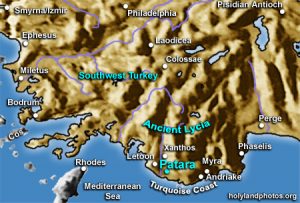 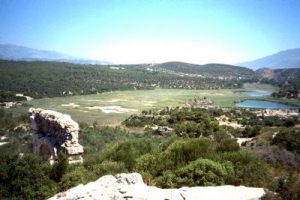 During the Roman period, Patara was the judicial seat of the Roman governor, and the city became the capital of both the Lycian and Pamphylian provinces at one time.  Patara was frequently called “the chosen city” and “the metropolis of the Lycian nation.”  This was made apparent from excavations of the 2nd century BC, in the inscriptions on the monument built in honor of one of the first general governors, C. Trebonius Proculus Mettius.  Around 138 BC Patara had a population of about 20,000 and ranked among the top cities of Anatolia after Ephesus.  Emperor Vespasian visited Patara, as did the emperor Hadrian and his wife Sabina (exalted by the Patarans to “new Hera”; both emperors made contributions to the city).   (From lycianturkey.com)

In Christian history Patara is famous for being a place of St. Paul’s missionary work at the end of his third missionary journey as he changed ships enroute to Jerusalem.  Patara was also the birthplace of St. Nicholas (born c.260-280 AD), bishop of Myra and the future Santa Claus.