The Story of Young St. Nicholas

A collection of books that tell the story of young St. Nicholas from a historical perspective, yet presents it in a novel format, all the while interjecting the reader with subtle underpinning of Christian values. The story is set in a flourishing maritime area on the Mediterranean coast of modern day Turkey.

“This is a beautifully written novel that will grip the attention of anyone who reads it. It covers the story of St. Nicholas’ childhood, his journey to understanding what is most important in life, and how he became known as ‘the giftbringer.’ The entire story is laced with sound Christian principles and values (most of which are reflected in the lessons that young Nicholas learns as he goes through life.) “

“…superbly written, I love everything about it— the characters, the setting, the storyline…you are an amazing writer!”
— Mustang, Oklahoma

“Giftbringer is so good, I love your character development, the fast pace and the true wonder and imagination of your plot.”
— Camden, Maine

“Though only eleven, little Anna showed promise of greater beauty than either of her two sisters, or so Nicholas thought.  She had curly hair and a small porcelain-like face with greenish, expressive eyes as mysterious as those of a cat.”

Giftbringer, The Series…
The Stories of Young St. Nicholas
by Frederick Wiegand 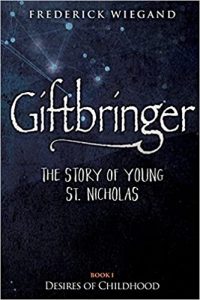 Giftbringer tells the story of young Nicholas, a boy growing up during the turbulent years of the late Roman Empire. Only child of wealthy parents, Nicholas’ yearnings for a life of ease, finery, and splendor lead him into a series of mishaps culminating in a wild chariot race through the Mediterranean countryside. Through many trials, including a ravaging plague, Nicholas learns the hard way that it is better to give than to receive, setting the stage for a series of secret Christmas gifts that will ultimately establish his reputation as the greatest giftbringer the world has ever known.

Put a fresh log on the fire, brew a steaming cup of tea, coffee, or hot chocolate, and settle into a cozy chair. Open one of these books and embark upon a journey into the past. Giftbringer will transport you to another time and place to meet a boy destined to become one of the world’s most beloved figures. Born to wealthy parents, the young Nicolas has a life-changing encounter with God, which ultimately transforms him into the legendary Giftbringer.

Told in historical detail with insightful imagery, this tale includes colorful characters facing daunting challenges and confronting difficult moral choices. The stage is set for a series of secret Christmas gifts that will establish young Nicolas’ reputation as the greatest Giftbringer the world has ever known.

This enchanting story will warm your heart and renew your spirits, not only during the Christmas season but throughout the year. They will become treasured books to read again and again.

Make Giftbringer part of your family’s holiday celebration…   The perfect gift for yourself or someone you love.